The U15 squad will train once a week before Christmas and twice a week after Christmas. The squad will continue to train over the summer alongside a number of Super 2s fixtures with a festival.

The squad will train for once a week before Christmas and twice a week after Christmas. Training will continue in the summer alongside Super 2s. 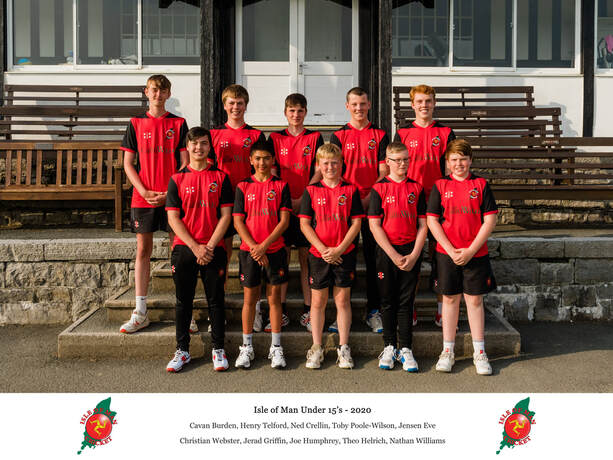 ​The Isle of Man’s U15 side enjoyed a successful tour with three wins out of three.  They opened up with a win in Friday’s forty over match at King George Playing Fields. After bowling Guernsey out for 146, with Cavan Burden 2-13 and Fraser Clarke 2-19 and Jenson Eve, Toby Poole-Wilson, Nathan Williams and Theo Helfrich each picking up a wicket. Then a solid partnership between Luke Ward (35) and wicket keeper Henry Telford (22) steadied the ship after being 4 for 2. then Dollin Jansen then clinched victory with a well-paced half century.

The IOM U15s finished with three wins out of three with victory in both of Saturday’s T20 matches at College Fields. In the first game, the Isle of Man scored 128 for 6 with Dollin Jansen top scoring with 63, well supported by Joe Humphrey, Tom Ward and Jenson Eve who gave impetus at the end of the innings. The IOM then restricted Guernsey to 119 with Fraser Clarke 3 for 25 the pick of a strong bowling performance, Nathan Williams 1-18 and Jenson Eve the other wicket taker.

In the second T20 game the IOM bowled first and although Guernsey made a strong start, they eventually finished with 124 for the loss of only two wickets with accurate bowling from Dollin Jansen (1-11) and JJ Griffin restricting the Guernsey openers in the latter stages. The Isle of Man were quick out of the blocks in their reply with Dollin Jansen setting the tone with 19 off the opening over, ably supported by Luke Ward. Dollin completed his third fifty of the tour, eventually finishing 73 not out including an opening partnership of 119 with Luke Ward (33).

An excellent Guernsey festival for the U15s with the three wins reflecting how well they played. There were some excellent individual and team performances with everyone contributing with the either the bat, ball or in the field. The fielding unit was well led by JJ Griffin and Joe Humphrey, Nathan Williams captained maturely setting intelligent fields in conjunction with the bowlers and Henry Telford was very consistent behind the stumps.

​Thanks to Guernsey Sport Photography for the excellent photographs. 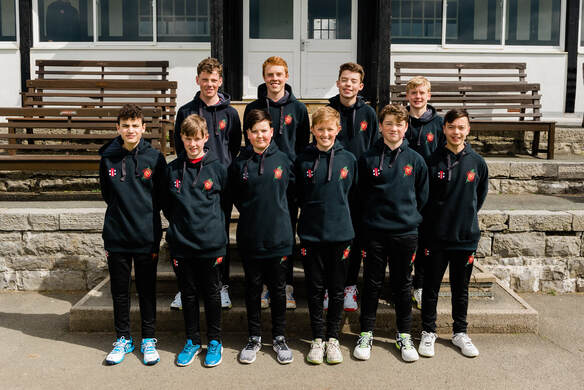 The Isle of Man U14s were at the Bromsgrove festival from Thursday 8th to Saturday 10th August due to play a mixture of T20 and 40 over fixtures.

Thursday 8th August saw the U14s play Guernsey U15s in the first T20 match with Guernsey batting first. With a disciplined bowling display the Isle of Man restricted Guernsey to 109 for 7 wickets. The wickets were shared between Toby Poole-Wilson 3-13, Jacob Butler 1-8, Jenson Eve 1-18, Josh Kewley 1-16 and Ben Dougherty 1-17. The U14s then knocked it off for the loss of three wickets in 11 overs with Luke Ward 24 and Dollin Jansen 43 putting on 61 for the first wicket doing most of the damage.

In the second T20 against Buckinghamshire U14/U15s the U14s batted first and limped to 92 for 9 wickets with Jenson top scoring with 20. The Isle of Man made Buckinghamshire work hard for their runs but 92 just wasn't enough and they knocked it off in 16.5 overs. The wickets were taken by Toby 1-24 and Fraser Clarke who bowled an excellent spell of leg spin taking 3-12 with an outstanding catch from his bowling by the Jacob and Christian Webster combination. Jacob leaping in the air on the boundary and flicking it back for Christian to catch within the boundary.

Friday 9th August saw the T20 versus Guernsey start and the Isle of Man reach 95 for 9 with Carl Hartmann making 28 but for the game to be abandoned due to rain. This was also the theme for last day with the matches being abandoned due to torrential rain with the lads playing indoor cricket instead.


Monday 30th July versus Cardiff and Vale of Glamorgan U14s
Captain Luke Ward lost the toss and was put into bat. Sam Barnett (41) was the first to go with a good opening stand of 65. Luke Ward continued along and was joined by Carl Hartmann (30) and at 176-4 were well positioned to make a big score but the loss of Carl and then Luke for a well made 66 saw the team collapse to 205 all out.
In response Cardiff were 37-5 with some accurate bowling from Toby Poole-Wilson and Spencer Clarke but some middle order partnerships crept the score up for Cardiff. But the return of Spencer (9 overs 1 maiden 3 wickets for 26 runs) and Toby finished the innings at 139 all out. Toby evernually finished with an excellent 6.4 overs 5 wickets for 18 runs.


Tuesday 31st July versus Tower Hamlet U14s
The U14s battered first and partnerships throughout finished on 210 for 6. Sam Barnett continued his runs from the previous day making a fluent 61 and supported by Carl Hartmann 53. The innings was finished with a quick fire 36 by Christian Webster.
In response Tower Hamlets stayed in the game throughout but the U14s continued to pick up wickets to eventually bowl them out for 182. Jenson Eve finishing with 7 overs 1 maiden 4 wickets for 27 runs and Toby Poole-Wilson 9 overs 1 maiden 3 wickets for 33 runs.


Wednesday 1st August versus Buckinghamshire U14s
Buckinghamshire won the toss and chose to bat first. On a good wicket they finished on an excellent 283 for 2 wickets with their number three batsman making an unbeaten 100.
In response the U14s collapsed to 40 all out with Josh Clough (14) the only player making double figures.