​The Isle of Man National Team will resume training in 2022 with lots to prepare for with the ICC 2024 Men's T20 World Cup Europe Sub-Regional Qualifiers announced. The Isle of Man are due to play from the 12th to the 19th July 2022 in Finland as part of Qualifier A in group 2 including Romania, Isle of Man, Cyprus, Turkey and Serbia. 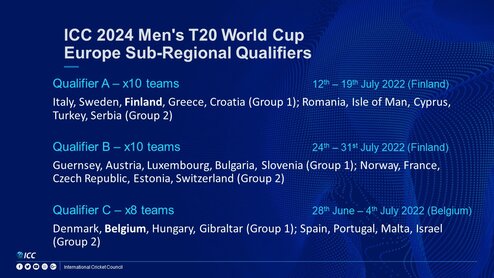 ​Pathway to the 2022 World Cup Announced by the ICC

After the postponement of the 2020 qualifying event in Denmark the ICC have announced the new schedule for all countries to qualify for the 2022 T20 world cup in Australia to be held in October and November.
Venues and groups remain the same so the Isle of Man will travel to Denmark to play against Denmark, Czech Republic and Romania in July.

The International Cricket Council (ICC) has today announced the qualification pathway for the ICC Men’s T20 World Cup in Australia which is set to take place in October and November 2022.

The 15 spots in Australia will be decided through a four-step qualifying process which starts in April 2021. 11 regional qualification tournaments across five regions have been rescheduled to 2021, due to COVID-19 and will now feed into the 2022 Australia event.
With the return of cricket in early 2021, we will see 86 different teams with the opportunity to fill the 15 World Cup spots – with hosts Australia already securing one – over a 13-month qualification campaign. For the first time ever Hungary, Romania and Serbia will be competing for Men’s T20 World Cup qualification and Finland will play host to an ICC event for the very first time. In a festival of cricket it will also be the first time that Japan will host a Men’s T20 World Cup Qualifier, on the back of the U19 Men’s Cricket World Cup Qualifier they will host two weeks before.

At regional level there will be 67 Associate Members taking part. Due to the depth of strength within Africa and Europe, both regions have sub regional qualifiers feeding into a final qualifier for the region. Africa, Americas, EAP and Europe will have one top tier regional qualifier and Asia will have A and B to determine which teams will progress into the two eight-team global qualifiers.
The 16 available spots in the Global Qualifiers will be filled by one team each from the Africa and EAP Qualifier respectively. They will be joined by two teams each from the Americas and Europe qualifiers. Finally, Asia which has a Qualifier A and B will see one team from each event make up the eight spots from regional qualification.

In the lead up to the Australia event there will be 225 Men’s T20 Internationals scheduled to be played across 13 months, giving every team an opportunity to climb the MRF Tyres ICC Men’s T20I Team Rankings.

ICC Head of Events, Chris Tetley said: “We are delighted to announce qualification for the ICC Men’s T20 World Cup in Australia in 2022. The pathway which culminates in the eighth Men’s T20 World Cup which will be held in Australia, sees the likes of Hungary, Romania and Serbia competing for the first time in an ICC event of this format, highlighting the increased competitiveness within Associate Members. In addition, a remarkable 225 Men’s T20 Internationals are scheduled to be played providing a substantial number of playing opportunities to all Members.”

The 16 teams that had originally qualified for the 2020 Australia event will now play in the ICC Men’s T20 World Cup 2021 in India. The participating teams for that event are Australia, Afghanistan, Bangladesh, England, India, Ireland, Namibia, Netherlands, New Zealand, Oman, Pakistan, Papua New Guinea, Scotland, South Africa, Sri Lanka and West Indies.
All events are subject to COVID-19 arrangements if required at that time.

​It is with regret that the ICC, in agreement and with the support of hosts Belgium, have collectively been forced to make the unfortunate decision to postpone the ICC Men’s Europe World Cup Qualifying event due to be held in June 2020, as a result of the on-going COVID-19 pandemic.

International borders remain closed across a number of competing countries, including Belgium, and there remains a high level of uncertainty as to when competitive international cricket can be played safely.

The ICC have released the following press release detailing the future competition pathway for the IOM senior team.

This highlights the ICC's approach to equitable competition opportunities and now sees all countries as close as 15 games away from competing in the world cup.

These sort of incentives should really drive players from smaller countries forward at all levels to potentially put themselves on the world stage competing against the likes of England, Australia and India.

The selection process for players on the Isle of Man will be released soon, all we want to say is league performances count in this process so would encourage players to get themselves seen with runs and wickets.

Denmark are joined in group A by Germany where cricket is growing rapidly as well as France, Austria, Cyprus and Portugal. Jersey, in group B, will be joined by fellow top seed Italy along with Belgium, Spain, Isle of Man and Finland.

Group C sees Nordic neighbours Sweden and Norway go head to head against fifth and final top seed Guernsey, Gibraltar, Israel and Czech Republic. All three groups will be staged as part of a single event to be held in the Netherlands between 29 August and 3 September 2018 with the top two teams from each going through to the European Final in 2019.

The European Qualifier and Final are part of a new simplified qualification process for ICC global events that provides a merit based pathway for every Member announced by the ICC earlier this week. As well as reducing the number of steps towards a global event, the new process also provides more regular competitive opportunities for more Members with the ultimate aim of more competitive teams in T20 cricket.

18 European teams will vie for six spots in the ICC World T20 Europe Final in 2019 demonstrating the tremendous growth of cricket across Europe.  The competing teams will have an opportunity to join the four other European nations (England, Ireland, Scotland and Netherlands) who have already qualified for the ICC World T20 or the ICC T20 Global Qualifier.

ICC Regional Development Manager Europe Ed Shuttleworth commented: “It is incredibly exciting to see 22 European nations challenge for spots in the ICC World T20 2020.  18 of these teams will start their journey start in the Netherlands on the 29th of August 2018 with the remainder joining in 2019 or 2020 itself. The number of national teams competing is evidence of the expansion of cricket across Europe and we look forward to this wonderful celebration of European Cricket.”

The Netherlands has been selected to host this event and is looking forward to accommodating their European neighbours on their world class facilities. Chairperson Betty Timmer commented “We are excited to host the ICC World T20 Europe Qualifiers. The event will be an incredible spectacle with 18 countries playing across three groups of six. The KNCB look forward to welcoming our European friends to the Netherlands”.