The Isle of Man has a number of opportunities to play cricket other than the traditional 'hardball' cricket. These modified games can be played in a smaller playing area, with softer balls and lighter bats, indoors and outdoors and in the dark! There are number of different options available for all ages and abilities.

The ICC have launched the Criiio campaign, bringing together 460 million people playing cricket globally to celebrate the magnificent diversity of cricket. The ICC has asked cricket lovers to join the social cricket tribe by sharing pictures and videos of where and how they play cricket across the world using the newly launched #criiio. The ICC Chief Executive Manu Sawhney said "Criiio is a celebration of everyone playing cricket their way and world cricket wants to invite them into the criiio cricket tribe. Cricket is for everyone, it is inexpensive, engaging, simple and fun and we want to share all the different ways that the game can be played around the world, Hundreds of millions of people are playing cricket the way they like to - on the beach, in a carpark or their backyard. Criiio is a celebration of all the brilliant and unique ways people play the game which can be played anywhere, by anyone, at any time".

​The many modified versions on cricket which are available on the Isle of Man link well with the ICC's Criiio philosophy that cricket can be played ‘anywhere, by anyone, at anytime’. 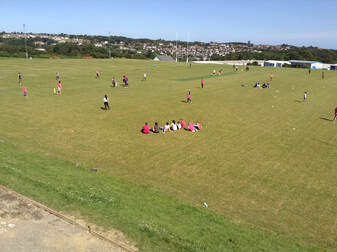 Indoor cricket is a fast paced, action packed version of the game suitable for all levels, with easy to follow rules and an emphasis on fun and speed..

Beach cricket is an informal version of the game played on the beach and involving just about anyone who wants to play.