​Winner: Elliott Butler - Castletown CC
Elliott took part in the CricStart Facilitator training in May and has not looked back. He has been coaching as part of the Castletown CricStart programme on a Sunday morning at King William's College and the children absolutely love him. He is a very energetic, motivated and enthusiastic coach and all the children leave his session with a huge smile on their face just like his own! 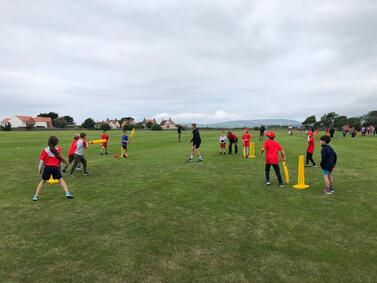 Winner: Craig Hartmann - Crosby CC
Although not now holding any official post at Crosby beyond “committee member”, Craig has been for many years, and still is, the go to man for just about everything at the club. Ground maintenance, organising junior training, arranging senior teams, matchday (in fact everyday) hassles, CricStart, club administration at all levels, communications, umpiring, headache solving, impromptu barbecues (or “braais” if you really must...). Insisting on the highest standards on and off the pitch with a combination of responsibility and irreverent fun, contributing so much himself to enrich the cricket experience for others. The amount he does can only pose awkward questions for the rest of us!

When people think of David Kenworthy they think of umpiring! He took up umpiring in 2001 and soon began to progress though the umpiring ranks. Always looking to improve and better his umpiring. He was elected on to the European Umpire’s Panel in 2008 and then onto the ICC Europe’s Elite Panel 2010. He was pivotal in establishing the IOMCA Umpires Association and keeping it going whilst being secretary and communicating between the umpires and the IOMCA and the leagues. If dedication to umpiring isn’t enough he has also been the Chairman and Secretary of Castletown Cricket Club. 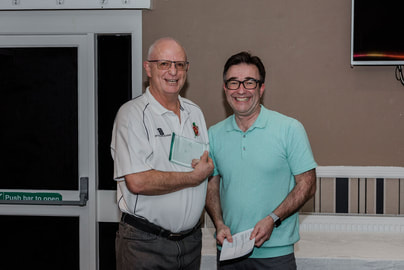 Lifetime Services to Cricket
Winner: Ian Tomlinson
The Lifetime Services to Cricket award was posthumously awarded to Ian Tomlinson and received by the Tomlinson family. Ian Tomlinson was Finch Hill CC president, former chairman, player, coach, umpire and a true enthusiast for cricket. He won the award for Best Bowler on six occasions, helping Finch Hill to be a dominant force in Manx cricket in the process. He represented the Isle of Man as a player and later as an official for over four decades. He served as IOMCA secretary, treasurer, and two terms as chairman, ensuring the game moved with the times and stayed relevant in a changing world. Ian was a key figure in developing the close relationship with the MCC, and manager of the successful Isle of Man team that won the Victoria International Six-a-Side competition in Canada. Ian’s love for the game was immeasurable, and his infectious personality endeared him to all he met. His sudden death in July this year was a sad day for Manx cricket. A huge thank you to the Tomlinson family for receiving the award and for Jamie who spoke so poignantly about his father and his love for the game.

The end of season Celebration of Cricket will be taking place on Sunday 21st November starting at 4 o'clock at Cronkbourne Cricket Club. The second part of the Celebration of Cricket will involve presentation of junior and senior league winners and volunteer award winners. The volunteer awards are aimed at recognising and rewarding volunteers who give so much of their time to supporting and growing cricket on the Isle of Man. The awards include Lifetime Services to Cricket award, Young Volunteer of the Year award, Club Volunteer of the Year award and Services to Cricket award and the nominees and winners (who will be chosen by an independent panel) will be announced during the evening.

Young Volunteer of the Year
Nominees: Sam Barnett - Finch Hill CC, Spencer Clarke - Finch Hill CC, Carl Hartmann - Crosby CC, Caitlin Henery - Ramsey CC, Josh Kewley - Finch Hill CC, Bliss Murtagh - Cronkbourne CC and IOMCA, Tom Ward - Ramsey CC and Nathan Williams - IOMCA.
​Winner: Carl Hartmann - Crosby CC
​
Carl is a vital junior member of Crosby Cricket Club assisting the Committee in various aspects and he plays an integral role in the transition from junior to senior league cricket in the club. This year, as Carl moved to U16 with no weekly junior cricket, Carl did all the pre-season mowing of the field in preparation for the season during Covid and the majority thereafter once the season got underway. He assisted in the pitch marking and field set up for home games he played in and various junior matches he attended. Carl also volunteered for all club fund raisers, E2E marshalling, bag packing and assisting with the club quiz doing the raffle. He has also assisted coaches for the last 3 years at the Manx Youth Games and managed the majority of the club iPad’s for match set up, scoring and submission of results

If ever a person deserved an award for their efforts as a volunteer working tirelessly behind the scenes of a Manx cricket club it is Janelle.  She has three children all playing for our different teams and supports them to the maximum (naturally), helps organise our junior section and Manx Youth Games, assists the senior captains with team selection and player availability, liaises with the IOMCA with regard to fixtures, coordinates with our groundsman regarding pitch preparation, scores most of the games she watches (including for the IOM 1st XI in Guernsey), sits on our committee as club welfare officer, participates in the ladies cricket events, is webmaster for our Play Cricket page and club website, and is basically the oil that keeps Finch Hill CC wheels turning.  Sadly this season we haven’t been treated to her excellent cricket teas on Saturdays but we live in hope for next year.

Mark was nominated by a number of individuals from Castletown CC who wished to express their thanks to Mark Williams for being a mentor and role model to their children over the last few seasons. They owe an enormous debt of thanks and gratitude to him and would like to nominate him for his role as an outstanding servant to Castletown CC over the year
​
Lifetime Services to Cricket
​Nominees: Neill Angus - Castletown & IOMCA, Roy Corlett - Finch Hill CC, Peter Crompton - Cronkbourne CC & IOMCA, Craig Hartmann - Crosby CC, Maurice Trace - IOMCA and Rob Webber - Ramsey CC.
Neill Angus - Castletown CC & IOMCA.

​Neill was a player for Castletown CC and he joined the club when they had only one senior team and no junior section. He was instrumental in the growth of Castletown CC to the club they are today with two teams on a Saturday and one each in the Forrester and Cain and six junior teams. He was also treasurer of Castletown CC for a number of years. Neill was Chairperson of the IOMCA for seven years and treasurer before that. He was hugely committed to his role as Chairperson even after being diagnosed with a terminal illness. He was instrumental in the Isle of Man joining the ICC and the huge benefits that has brought to the island cricket community. Committed to the development of cricket on the island for a huge number of years at club and association level. His vision has always been to see the growth of Castletown and Isle of Man cricket as a whole 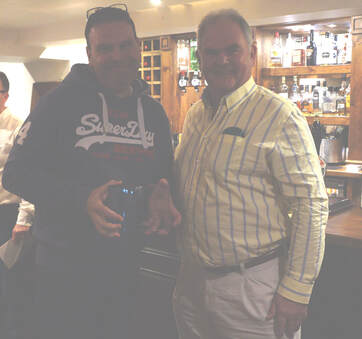 The IOMCA decided after this unprecedented year to initiate a series of awards to say thank you to volunteers. These annual awards are aimed at recognising and rewarding volunteers who give so much of their time to supporting and growing cricket on the Isle of Man.

The awards include -
Lifetime Services to Cricket award - this award recognises those individuals who have made an outstanding difference to their cricket club, league or local cricket community over a significant number of years.
Young Volunteer of the Year award - this award is for under 18s and is designed to highlight and show the fantastic contribution that young volunteers can make within the game.
Club Volunteer of the Year award - this award recognises the special volunteer that every club simply couldn’t do without. The individual often undertakes a number of different roles within the club which are generally behind the scenes and they are always there to lend a hand whenever needed.
Services to Cricket award - this award is for those individuals who are providing vision and direction in growing the game often outside of the traditional roles within a club.

All nominees were invited to attend the end of year Celebration of Isle of Man Cricket event at The Crosby Pub on the 11th October. and the winners chosen by an independent panel will be announced during the evening.