​The women's senior squad train on a Saturday at the National Sports Centre during the winter.

The women's senior squad train on a Saturday at the National Sports Centre during the winter. Summer training will be a Tuesday evening during the summer and the squad will also play a number of Super 2s fixtures. 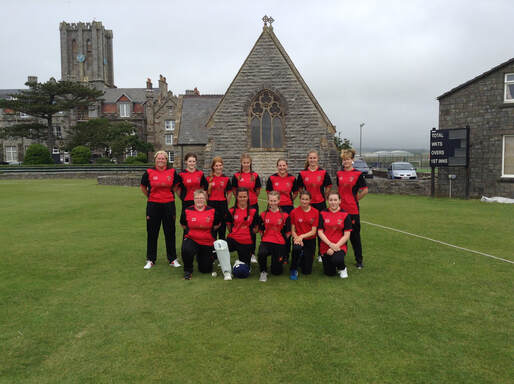 On Sunday 4th July the women's Senior Squad played a Junior Manannans side of Isle of Man U13 and U15 boys squad players in their first fixture together as a squad. The Junior Manannans won the toss and chose to bat. After a strong start for the boys Matilde Jackson took a good and bowled to remove the captain Thomas Ackron (19). David Sargent retired shortly afterwards for a well made maiden 50. There was then a period where the women were on top restricting the boundaries and eventually removing Dylan Howard bowled by Jo Hicks. This though brought Lucas Stennett and Sam Burrows together with Lucas giving some much needed impetus with the Junior Manannans finishing on 152-2 with Sam Burrows finishing with 42 not out.

After an early wicket Lucy Barnett and Bliss Murtagh put on 35 for the second wicket. Both rotated the strike well with Bliss hitting a number of boundaries. Bliss was eventually bowled by Elliott Butler for a well made 22. This brought Caitlin Henery to the crease who continued the positive stroke play. Caitlin and Lucy put on 23 for the third wicket with Lucy out for 19 caught by Joe Page of the bowling of Zak Kanewski. Caitlin continued keeping the run rate up hitting some shots over the top off the spinners but was finally caught by Lucas Stennett off the bowling of Joe Barker. After Caitlin was removed the Junior Manannans bowled some excellent lines and restricted the boundaries and the Senior Squad eventually finished on 102-8. Against an experienced Junior Manannans side this was a good first fixture together for the side and bodes well for the future.