Isle of Man Cricket and Manx Sport and Recreation (MSR)

Please visit the Manx Sport and Recreation website: msr.gov.im/sporting-club-manx-youth-games.../ for the training booklet and online registration 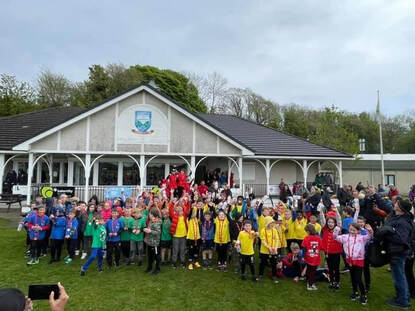 ​The HSBC Manx Youth Games took place on Saturday 15th May 2021. The day began with an opening ceremony at the National Sports Centre with all the participants from 15 sports marching onto the track in their brightly coloured t-shirts representing the team they are competing for: Red – North, Orange – South, Blue – West, Green - Douglas South, Yellow - Douglas North. The highlight of the opening ceremony is the group warm up which takes place to music in front of the packed grandstand.

Cricket participants then move to Cronkbourne Cricket Club for a series of matches. There were 12 teams, 96 children playing cricket during the festival. It was a really fun day where the weather certainly didn't dampen the players enthusiasm and energy. After a disrupted winter of training where only 6 out of the 12 training sessions were completed there were some excellent batting, bowling and fielding skills on display. The festival is completed with a presentation of medals and water bottles by Matthew Ansell National Team captain and Nagachandra Ps from HSBC to all of the participants. A huge thanks to the coaches and volunteers who helped prepare the players and ran the teams over the day and to Cronkbourne Cricket Club for their excellent hospitality.

Due to the current Covid lockdown young people have not had the opportunity to attend weekly training sessions. However, we are very hopeful lockdown and restrictions will be lifted in time and everyone can enjoy a great MYGs event on Saturday 15th May 2021. In order that we can plan the sports, sort T-shirts and ensure we all have a great day registration will be slightly different this year. Information regarding the Manx Youth Games and registration can be found on this link: msr.gov.im/sports-development-unit/manx-youth-games/

The Community Games took place on Wednesday 19th June where secondary school pupils from across the Isle of Man who aren't involved in a school, club or island team are invited to the NSC to experience a variety of different sports and physical activities. The IOMCA had arranged for the Cricket Factory rig, banner zone and core skills equipment to be at this years Community Games. The Cricket Factory allows participants of all ages and abilities to perform a variety of cricket activities in different ways. With the IOMCA's focus on developing women and girl's cricket in 2019 over 100 girls experienced cricket in a fun and unique way (some for the first time). Each participant then received a free Cric Start bat and ball set. Hopefully these girls will go on to join the regionalised girl's training and women and girl's soft ball festivals.

The IOMCA will be using the newly purchased banner zone and core skills equipment across the Isle of Man to promote the game.

The 2019 Manx Youth Games was held at Cronkbourne Cricket Club on Saturday 18th May.

After the opening ceremony at the National Sports Centre all the cricketers were bused to Cronkbourne Cricket Club. In the first round of games there was a first (as far as I am aware) in Manx Youth Game's cricketing history with the North girls playing Douglas North Girls (and two boys). Each team played two games before everyone had tea. After burgers, cakes and juice each team played their third game.

Once all three games were played Andy Coulson (IOMCA Secretary) did a speech to players, coaches and parents and then Jaime Amoedo (HSBC representative) presented the water bottles and medals and Matthew Ansell (National team captain) presented the Cric start bat and ball sets provided by the IOMCA to each of the participants.
​
The 2019 Manx Youth Games was a record breaking year with 10 teams including two girl's teams. A huge thanks to all the coaches and their helpers, Cronkbourne CC for hosting so well, Manx Sport and Recreation and HSBC for their continued support 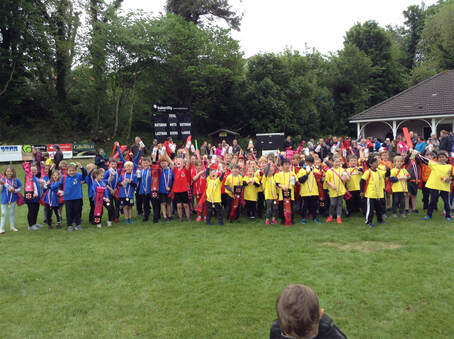 The Isle of Man Cricket Association is committed to developing girls cricket and girls have the option to train and play as a girls only team or as part of their region in this years Manx Youth Games.
Girls Only 6-7 @ St Ninian's Upper School starting Monday 21st January to May 13th excluding February 18th, April 8th, 15th, 22nd & May 6th,
These sessions are for school years 2-6 and cost £1.

The Manx Youth Games will be held at Cronkbourne Cricket Club on May 18th.

The IOMCA is happily part of the Manx Youth Games. The Manx Youth Games supported by HSBC is the biggest multi-sport event for children on the Isle of Man which attracts over 1000 participants and cricket is one of 13 different sports. The Manx Youth Games event itself is held in May each year but weekly training sessions also take place around the island in preparation for the event from January.
The day begins with an opening ceremony at the NSC with all participants marching onto the track in their brightly coloured t-shirts representing the region they are competing for:
Red-North, Orange-South, Blue-West, Green-Douglas South and Yellow-Douglas North.
Cricketers then move off to their venue Cronkbourne CC on the bus to compete in a round robin style festival. The day finishes with a presentation of medals to all the participants.

The community games is aimed at 11 to 18-year olds who don’t belong to a school, club, or island team, the games are attended by students from the Department of Education and Children’s five secondary schools. Young people get to play a variety of sports including glow cricket in a relaxed, fun and non-competitive environment. The aim is for students to stay involved in a sport of their choice and hopefully join a community club. 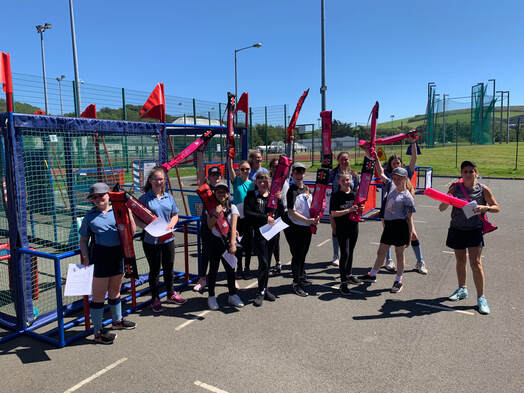