After an unusual start to the 2020 season the IOMCA ran 6 women and girl's soft ball festivals across the Isle of Man for the second year after a fantastic inception in 2019. There were seven different teams who participated in two to six of the festivals. Ramsey, Castletown, Cronkbourne, Finch Hill and Ramsey Hockey Club returned after playing in last years festivals and new for 2020 were the Isle of Man Badminton squad and Peel and St Johns. The record breaking festival was held at Ramsey Grammar School with four pitches, 8 teams and over 80 players! The standard of play has continued to improve with Castletown and Cronkbourne training on a regular basis throughout the season.

The clubs who hosted did a fantastic job preparing pitches, attracting new players and baking cakes. Thanks to Ramsey, Peel and St Johns, Finch Hill and Cronkbourne who each hosted one festival and Castletown who did two festivals. Unfortunately the festival at Crosby had to be cancelled due to the weather.. Huge thanks to all the scorers and umpires. Keep an eye out for updates and activities in the winter.

On Sunday 26th July ​the Ramsey Cricket Club women and girl's festival broke the previous record of six teams at Finch Hill CC in 2019. There were four pitches with 8 teams and over 80 players from Ramsey CC, Ramsey Hockey Club, Cronkbourne CC, Finch Hill CC and Castletown CC taking part over the afternoon. A huge thanks to Ramsey CC for doing such a brilliant job organising and running the festival and baking such delicious cake to raise money for the IOMCA Guernsey trip.

The women and girl's soft ball festivals will be taking place again in 2020 after the success in 2019 with over 110 new participants over the summer. A huge thank you to the clubs who are hosting again in 2020. 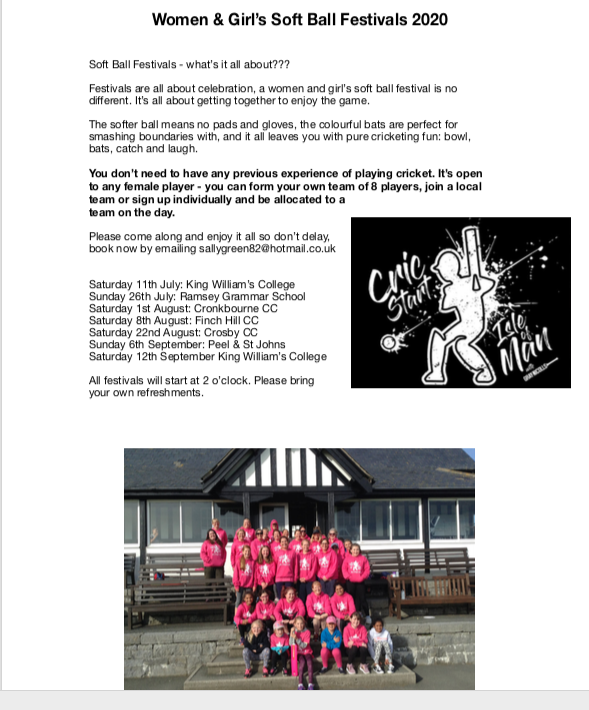 In 2019 the IOMCA ran 9 women and girl's soft ball festivals across the Isle of Man for the first time. All in all over 110 new participants took part across the summer. Of these participants, nearly all the players took part in more than one festival demonstrating the desire to play even more cricket! Many of the participants played cricket for the first time and a large number who have been watching their husbands, sons, daughters and brothers plays decided it was their turn to give it a go. Participants were able to enter individually and be put in a team or enter as a team. Each of the players received a Cric Start bat and ball set as well as a hoodie or t shirt. Thanks to Ramsey and Castletown who entered a team in every festival and Ramsey Hockey Club, Finch Hill and Cronkbourne who also entered teams.

The clubs who hosted did a fantastic job putting on excellent teas and preparing pitches. Thanks to Ramsey, Peel and St Johns, Finch Hill, Cronkbourne and Valkyres who each hosted one festival and Crosby and Castletown who did two festivals each. Thanks to all the scorers and umpires. Keep an eye out for updates and activities in the winter.    ​

The IOMCA has organised women and girl's soft ball cricket festivals across the Isle of Man in 2019.

Soft ball cricket festivals - what's it all about???

Festivals are all about celebration, a women and girl's soft ball cricket festival is no different, it's all about getting together to enjoy the game.

The softer ball means no pads and gloves, the colourful bats are perfect for smashing boundaries with, and it all leaves you with pure cricketing fun: bat, bowl, catch and laugh.

You don't need to have any previous experience of playing cricket. It's open to any female player  - you can form your own team of 8 players or sign up individually and be allocated to a team in advance.

All players will receive a free Cric Start bat and ball set and hoodie or t shirt.

Please come along and enjoy it all so don't delay, book now by emailing iomcrickethotmail.com

On the 12th July at King William's College 23 girls split into four teams from Peel 1st Brownies, 1st Malew Brownies, Ballasalla Brownies and 2nd Castletown Brownies as well as the South and East girls played in an all girl's soft ball festival. Three games of cricket were played over the evening with the standard improving each game. A very fun and enjoyable evening of cricket!!

Jen Gilbert Peel 1st Brownies
'Thank you so much for tonight! The girls loved it! My daughter was very nervous at the start but soon got into it. She has declared how much she enjoyed it. She has taken her dad and brother out to play with her new bat and ball. Thanks again!'

Six teams and over 50 women and girls of varying ages played in the Finch Hill soft ball festival on Saturday 6th July. There were teams from Ramsey CC, Ramsey Hockey Club, Cronkbourne CC and a combined Finch Hill CC and Castletown CC. There was some excellent cricket played with a number close games. Thanks to all the players and to Finch Hill CC for hosting and providing such a lovely tea.

The evening before also saw the first all girls team play in the Finch Hill kwik cricket festival. The south and east girl's have been training on a Tuesday evening at King William's College and improved significantly over the festival. Well done girls!!

The first women and girl's soft ball festival took place at Crosby Cricket Club (Marown Playing Fields) on Saturday 15th June. Two teams made up of 19 players of various ages played two matches with a tea break in between. Lots of boundaries, wickets and catches were taken in amongst the laughter. Every player got to bat for up to 18 balls per pair and everyone bowled at least one over per game either underarm or over arm. At the end everyone received their free Cric Start bat and ball set and hoodie or t shirt.

Ruth Ward (cricketing mum and wife and first time player) said -
'I have watched my sons and husband play cricket for many years but was a complete novice when it came to playing. The festival was a perfect environment and opportunity to 'give it a go'! It was a really fun atmosphere with friendly and supportive women and girls (with Sally having her work cut out keeping us on track!) The sun came out, we were treated to a lovely cricket tea and much to my surprise I even managed a catch!! I would encourage people to come along and join in - you will certainly be made to feel very welcome and I'm sure you'll have a really enjoyable afternoon.'